Deacon Francois Innocent is the eldest of nine children. He attended the Institution St Louis of Gonzague, before enrolling in the Faculty of Agronomy in Port-au-Prince Haiti from which he graduated in 1951 with a BS in Agronomy. He continued his post graduate studies in Credit Administration and Information processing in United States and Economics in Brazil.

He was admitted into the Diaconate Program in the Diocese of Brooklyn and ordained a permanent deacon in 1990. Deacon Francois and his wife, Bernadette, are the parents of three grown children and six grand-children; they will be celebrating their Golden Wedding Anniversary in 2010. Deacon Francois has been serving in the Parish of Incarnation Queens Village since his Ordination. He is the senior cleric of the parish staff.

Born in Cuenca, Ecuador, first of 4 Children, Dcn Franklin went to school with the Salesian Brothers and graduated from Colegio Tecnico Salesiano in Ecuador. Dcn. Franklin arrived in NY on Jan 5, 1985. He continued his studies at Queens Community College.

He is married to Ana Maria and they have 3 children: Kevin 14, Gracemary 10 and John Paul a special little boy born on July 2009.

In 1997, he received a special call and with his family’s support, he entered the Diaconate Program and was Ordained as a Permanent Deacon for the Diocese of Brooklyn by Bishop Daily on April 21, 2001 and assigned to Immaculate Conception Church in Astoria.

In 2004 Dcn Franklin was transferred to Incarnation Church. In 2006 he was assigned by Bishop Nicholas DiMarzio to work for the Catholic Migration Office as the Special Assistant for Hispanic Concerns.

Deacon Clemenceau was born in Cap-Haitien, Haiti and is the seventh of ten children. He obtained a bachelor’s degree in civil engineering from the Faculté des Sciences, Port-au-Prince, Haiti. Continuing his engineering studies at Rheinisch-Westfaelische Technische Hochschule (RWTN), Aachen, Germany he was awarded a master’s in Foundation Engineering, Hydraulic Engineering and Water Economics.

With the support of the parish staff, he attended the diocesan diaconate preparation program at Cathedral Prep and was ordained a permanent deacon of the Diocese by Bishop DiMarzio on May 19, 2007 at the Basilica of Our Lady of Perpetual Help, Brooklyn.

Before ordination Deacon Clemenceau was married to Gerarde B. Canal who is currently an administrative/medical assistant. They have one daughter, Christina, who recently graduated from St. John’s University.

Born and raised in Port-au-Prince, Haiti before immigrating to the United States, Deacon Robinson graduated from York College with a degree in accounting. He is currently in the field of higher education as Associate Director of International Education, Principal Designated School Official and International Students Advisor.

He is married to his wife Marie and they have two teenage daughters. They reside in Elmont, New York.

After being accepted into the Permanent Diaconate Program for the Diocese of Brooklyn, Deacon Robinson was prepared for his ministry and Ordained a Permanent Deacon on May 23, 2009 by Bishop Nicholas DiMarzio. He was appointed to serve the People of Incarnation Parish that same day.

Deacon Louie was born in the Commonwealth of Puerto Rico.  He is the oldest of three children.

He started the Diaconate Program Studies at Cathedral Prep in the Fall of 2006.  He completed the five-year program and was ordained as a Permanent Deacon of the Diocese of Brooklyn by the Most Rev. Nicholas DiMarzio on May 28, 2011.  On the same date he was assigned to the Parish of Incarnation for a period of five years.

Mr. Perry Townsend is thankful to be serving Incarnation parish as Director of Music since March 2010.  He is also a cantor and Contemporary Ensemble director at Immaculate Conception parish in Astoria, and conducts the Community Singers of Queens in Flushing.  In the past, he has made a joyful noise at Holy Family in Fresh Meadows, St. William the Abbott in Seaford, Most Precious Blood in Astoria, and Church of St. Mary the Virgin in Manhattan.

He grew up in Raleigh, North Carolina, where he attended Trinity United Methodist Church and sang in the Raleigh Boychoir.  He has a bachelor’s degree from University of North Carolina School of the Arts, and a master’s from Queens College.

In addition to church music, Perry is active as a composer.  His music can be heard on Capstone/Ravello Records and American Modern Recordings.  His music has been performed at Carnegie Recital Hall, Tenri Cultural Institute, the Bowdoin International Music Festival in Maine, the ppIANISSIMO Festival in Sofia, Bulgaria, and the American Conservatory in Fontainebleau, France. 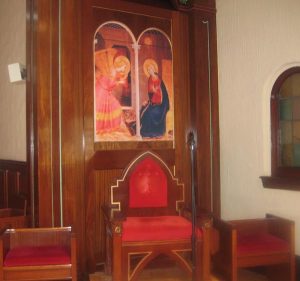 The Mystery of the Incarnation

The Mystery of the Incarnation can be summed up in one word:  Jesus.  It is the history altering event of the conception and birth of God’s only Son.  The word incarnation means taking flesh:  the Second Person of the Blessed Trinity took flesh in human history by the power of the Holy Spirit and the cooperation of the Virgin Mary.  It is a mystery of God’s Presence among us in time and space.

Below the Mystery of the Incarnation is explained by a creedal statement and an early council of the Church and then followed by a more extensive web link to the New Catholic Encyclopedia.

And we believe in one Lord Jesus Christ, the only-begotten Son of God, born from the Father before all the ages, God from God, light from light, true God from true God, begotten, not made, of one substance with the Father, through Whom all things were made. For us men, and for our salvation, He came down from heaven, and by the power of the Holy Spirit, He took on flesh from the Virgin Mary, and became man. (Nicene-Constantinopolitan Creed A.D. 325, 381).

So, following the saintly fathers, we all with one voice teach the confession of one and the same Son, our Lord Jesus Christ: the same perfect in divinity and perfect in humanity, the same truly God and truly man, of a rational soul and a body; consubstantial with the Father as regards his divinity, and the same consubstantial with us as regards his humanity; like us in all respects except for sin; begotten before the ages from the Father as regards his divinity, and in the last days begotten for us and for our salvation from Mary, the virgin God-bearer as regards his humanity; one and the same Christ, Son, Lord, only-begotten, acknowledged in two natures which undergo no confusion, no change, no division, no separation; at no point was the difference between the natures taken away through the union, but rather the property of both natures is preserved and comes together into a single person and a single subsistent being; he is not parted or divided into two persons, but is one and the same only-begotten Son, God, Word, Lord Jesus Christ, just as the prophets taught from the beginning about him, and as the Lord Jesus Christ himself instructed us, and as the creed of the fathers handed it down to us (Council of Chalcedon, 451).
Web link created for:

Click here to see the video for
Incarnation Catholic Academy.

Sign up for online giving with GiveCentral and THANK YOU for supporting Incarnation Parish!